Hitting all the red lights in green water

I was so excited to try out my new wide-angle lens (Olympus 9-18mm) that I didn’t even wait till I got the dome port. I went to Three Tree North on Sunday, March 1, and used a poorly fitting flat port, just so I could get an idea of the quality of the lens. 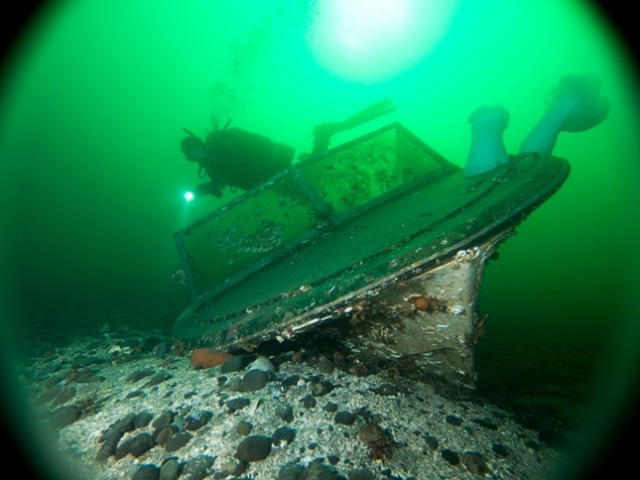 Then the dome port arrived on Monday.

Then I went diving on Tuesday.

Except it wasn’t quite that simple. Here’s what really happened. Warning: this is one of those stories where nothing goes right (except for the most critical things, fortunately). In other words, there were no dive emergencies, but pretty much everything else that could have gone wrong did. Some magazines have the ill-fated story on the last page — you can read about someone else’s disaster and hopefully learn from it and not repeat their mistakes. Well, this is like that, except possibly without any actual lessons.

The plan was to ride the 5:45pm Water Taxi from downtown Seattle to SeaCrest, where my car full of gear was waiting. It would be waiting a half-mile away, so the great hope was to find a closer parking spot.

I did get a little closer…but there were still no spaces in the parking lot proper, so I parked on the street next to Cove 2. When I had first arrived, I spotted my buddy, Andy, already parked in the lot; he’d taken an earlier Water Taxi and was quite relaxed waiting for me at his perfect parking place. I started to get my undergarment and dry suit on in the street when I noticed a space opened up in the parking lot, so I jumped in the driver’s seat half-dressed and drove into the lot for a good spot, then started to put my gear together. When I got to the point where you attach the part you breathe out of — you know, the air delivery system, aka regulator, aka “octopus” — it was not there. Ouch. I made this discovery not 5 seconds after chiding Andy for being slow to get geared up. Should have kept my mouth shut. (Hey, maybe there is a lesson in here after all.)

I jumped in the car again and drove to my house in peak traffic. Long lines of cars trying to get home from long days at work. I finally got to my house and grabbed the octopus, which was strategically placed in my basement in such a way as to be completely hidden from normal view. I jumped back in the car and hit precisely every single red light on the way back to SeaCrest. And when I arrived, it seemed like SeaCrest was the place to be on a Tuesday night, as parking was even worse than 30 minutes earlier, and I was back out on the street and further away than before. Anyway, Andy helped me haul my gear, and before much longer we were splashing.

Getting off the Water Taxi, I had noticed nasty looking bubbles floating on the water surface. When we actually made it in the water six hours later, the nasty bubbles were still floating by. One time in Hood Canal my buddy Stacey and I got in the water after a big sewage spill had occurred nearby at a trailer park. That was really gross. So was this. Andy thought it looked like water from the holding tank of one of the container ships in the bay. And while I was kicking out to our descent point, a small wave crashed right inside my mouth – so I got a mouthful of it. And it did not taste like saltwater so much as like chemicals. That’s some serious yuck. Or immune-system booster, if you want to look at it positively.

We swam to the tall white can buoy and dropped down. The plan was to swim to the end of the I-beams, as I wanted to test my new dome port and wide-angle lens on some structure, and I thought the I-beams would make a good subject, plus I was hoping for some interaction with a harbor seal, another good wide-angle subject. I was not one bit worried about seeing anything that would require a macro lens, as (a) what could possibly be in Cove 2 on a Tuesday that I haven’t seen before?, and (b) Andy had his camera with macro settings so he could shoot anything I could not.

I was proven wrong on item (a) within moments of descending, as I spotted a stubby squid eating a shrimp – something I have never before witnessed. I took photos with my wide-angle lens (set at 9mm – that’s really wide). Then I motioned for Andy to get some photos with his Canon. But item (b) didn’t work out so good either, and Andy didn’t get any shots of this little feast-in-action. Meanwhile, I tried to keep a good attitude and remind myself this dive was all about the wide-angle subjects. …here seal, seal, seal… (how do you call a seal underwater, anyway?)

Do you have any idea how awesome this photo would be if I’d had my macro lens? That is a shrimp he’s got in his arms — you can see the shrimp’s eye in the bottom right.

We swam another kick or two and BAM! Another stubby squid – this time it was easily the largest one I have ever seen. It was the monster mother lode of all stubby squids. It could barely swim it was so big and fat. It sort of bounced instead of swam. Later, Andy dubbed it the “tubby stubby.”

About this time, the harbor seal showed up, though I was mostly just catching sight of his silt trail, not him.

Out at the end of the I-beams, I found a decorated warbonnet in a really cool (read: photogenic) spot. If one had a macro lens, that is. It was in the corner of the bend of the beam, set in there like a bead of welding. 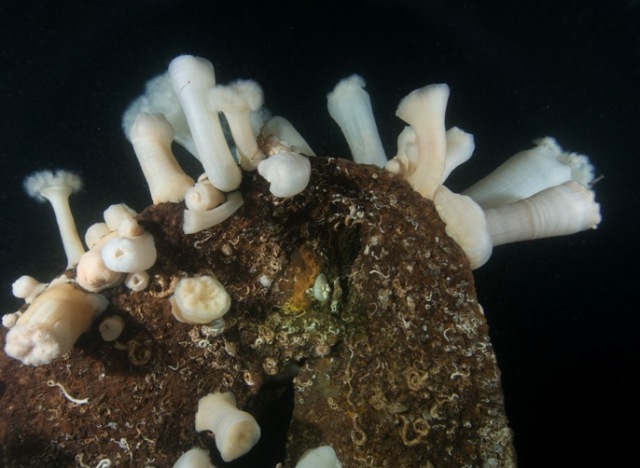 The bent I-beam. See the beautifully posed decorated warbonnet? Yeah, me neither.

After a few minutes, we turned around and headed up to all the pilings covered in white plumose anemones. On our way, we came upon the harbor seal, lying on the bottom. Just lying there like a pin-up girl. Posing. For the camera. Which I had in my hands. But I was so surprised by this centerfold piece, I froze. I did not take advantage of the fact that this guy was not moving, not swimming with his face away from me, not stirring up muck; he was just lying there, posing. And I just stared at him wondering why he was just lying there. By the time I finally decided there was nothing wrong with him and decided to start taking pictures, he decided he’d posed long enough. Just like that – BAM! — opportunity lost. (Hey! Another lesson: if you see a cool sight but worry that the animal might be sick or dying, shoot camera first, ask questions later. Um… See, even when I type it, it doesn’t seem right…)

But that seal was not done with me. For I had the perfect lens with the perfect port to get what could have been the perfect photo. And he knew it. It really was like he knew it – and wanted to help me out, give me the chance that no harbor seal had ever given me, the chance for perfect photos. We were at the place where there is sort of an arch made of fallen-over pilings, and they are covered in white plumose anemones, and he appeared below all this, and I followed him as he swam up and stuck his face right inside the anemone – like he was smelling flowers. But my camera would not fire. Then, it got even better (or, worse) – he turned and faced me and swam right to me, and he hung upside down in the water looking right at me, posing for me, totally cute and perfectly framed by anemones on three sides. Yes, we had a moment. But my camera… would not focus. Would not fire.

The only shot I got of the harbor seal in the anemones. I am completely sure that if the camera had been able to focus and fire, I would have had the next best thing to Petunia sniffing the flowers.

After that, I chased him around like is typical, his feet waving goodbye, and always a little faster than I could swim. And then the dive was over. And I knew without a doubt that I had no good photos of the stubby squid, the warbonnet, or the harbor seal, but that I just saw and experienced some of the coolest moments of my underwater life.

And, it turns out, the camera does okay when the subject is not in motion and acting all cute and charming…

White plumose anemones on the I-beams.