I was diving at Cove 2 this morning. “World famous” Seattle diving. Amazing diving in the Pacific Northwest! Well, two of these statements are true.

I was diving at Cove 2 because I just got all my regulators back from being serviced and leave for a big trip on Tuesday. This was a gear-check dive, 10 minutes from my house, at a place with easy parking (if you get there super early), bathrooms, a gear rinse area for afterwards, and a restaurant for breakfast, also afterwards. We were not going for the underwater life or beauty or the normal reasons I like to dive. And that’s a good thing, because there is not a lot of life left at Cove 2.

As my buddy John and I moved through the dive, I had memory after memory of the nudibranchs I used to see here, the octopus den there, the numerous species of crabs, the wide and wonderful array of fish species, the colorful variations of different species of sea stars… Now? Monochromatic variations on mud, muck, mucky algae, muddy algae, muddy muck, and mucky mud. I exaggerate only slightly. The bottom hasn’t changed — it’s always been muddy muck, but the life seems all but gone.

I remember once looking at a wolf eel while my buddy was getting my attention to look at an octopus, when another octopus went by. There were crabs, shrimp, nudibranchs, squat lobsters, and all sorts of other animalia standing by, waiting to have their photos taken, as our attention raced from one charismatic creature to the next to the next. Now? “There’s the place where [fill in the blank] used to be,” over and over and over. One dive I counted 5 different Decorated Warbonnets — on the same dive! I haven’t seen a single one in several years. Probably 2015.

2015 is the last time I recall seeing a lot of good life at Cove 2. That was also the year of the blob — the massive warm water blob off the west coast. It’s possible a lot of larval forms of the species we used to see regularly died out in the warm water of the open ocean, and nothing remained to keep the populations going.

A couple years earlier, 2013, is when we saw the last of our really giant sunflower stars. The massive, colorful stars grew to a meter in diameter and carpeted areas of our local dive sites. Then we saw them succumb to sea star wasting syndrome, melting into the muck, all that lush color and life gone along with the widespread effects that an apex predator brings. Or a top predator on the bottom anyway.

After we lost the sunflower stars, we saw a brief explosion of green urchin numbers. Now those are gone, along with just about everything else that made Cove 2 such a special place. It’s always been mucky, but a person used to be able to get in the water and trust that there would be several unexpected gems. The same is true for Three Tree North, Junkyard, Cove 3, and other local sites. I have to imagine it isn’t just the dive sites that have seen such a widespread loss of life.

The photos below are from dives of the distant past. It is hard to imagine we may have healthy giant sunflower stars like this ever again.

These days on most mornings I see Seattle Dive Tours staked out along the sidewalk near Cove 2, and it makes me sad every time. People new to Seattle or new to diving are going to enter this “world famous” wasteland and either think it’s great or wonder what all the fuss was about. The former are the lucky ones, as they have no idea what’s been lost. The rest are right to question. I only know what the fuss should be about: the total, quiet collapse of marine life in Seattle’s waters without the slightest fuss.

Giant sunflower star on a barnacle-encrusted bottle with a gunnel at Cove 2. From 2011. 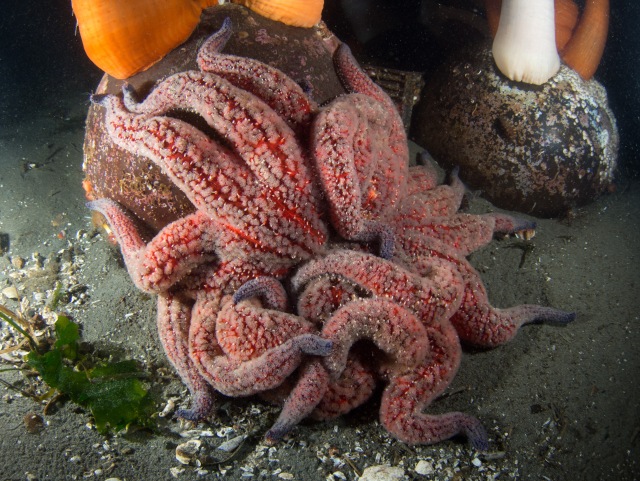 A tangle of giant sunflower stars. Or is it just one? Hard to tell. Junkyard, 2013. 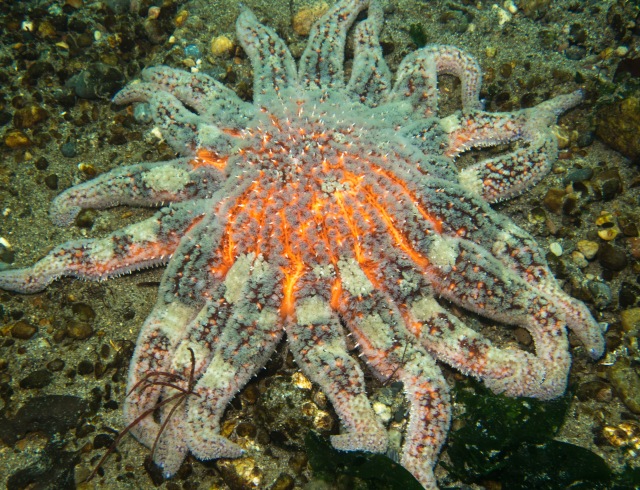 A giant sunflower star at Three Tree North in 2013, on a day when I had “two amazing dives.”

1 Response to Nothing but Muck