Backscatter be still my heart

If you are a friend of mine, you have probably heard me complain about, er, mention backscatter. Backscatter is the reflection of strobe light off the tiny bits of particle stuff in the water that can muck up an otherwise lovely photo.

I have a relationship with backscatter. Backscatter has caused me endless consternation, a lot of self-doubt, and more hours than I will ever, ever recover for the rest of my life no matter how long I live.

If you are a friend of mine, you have already patiently sat by while I’ve pined and droned on about these many hours of my life spent click click click click clicking to get rid of something that I should have had enough skill to not collect in the first place. So I won’t repeat all that here.

And, not for no reason have I spent this time. In fact, for better or worse, I have come to think of my underwater raw images as truly raw material to be molded and shaped into exactly what I want in what we inartfully term “post-processing.”

In the example below, I took what most people would regard as a wasted lost-cause of a photo, and I removed the backscatter, among other things. I did leave the bits of sand on the moray eel, and honestly, if I were to take that image on now, I’d have left more of the backscatter. But this rather extreme example illustrates how removing backscatter can certainly help improve an image.

Before. Most times, only a few bits of backscatter are removed. In this instance, sand was flying everywhere and made a mess of the shot. 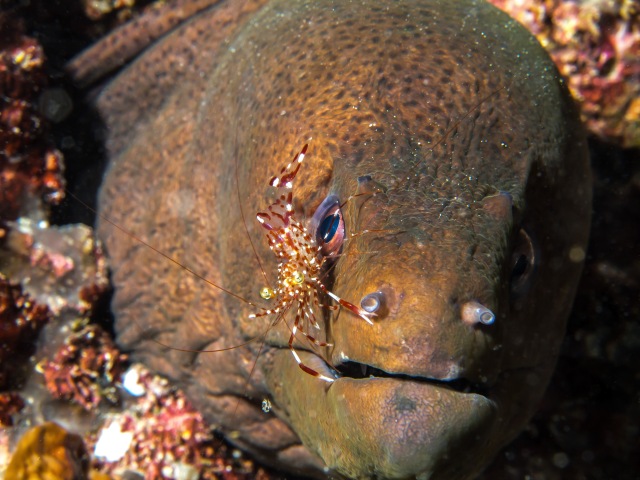 After. Editing in LightRoom, and you no longer need sunglasses to look at it! I likely removed at least 2000 bits of backscatter. It took me more days than I care to think about. The final product is no award winner, but it is respectable.

Endless click click click, for hours into days into years. And then. Then I went to California to dive the Channel Islands in November 2016. The trip was led by a professional underwater photographer, Richard Salas, whose teaching focus was about lighting (which, as you know by now, causes my arch enemy, backscatter). He gave us incremental lessons and instructed us to toss aside concerns of backscatter for the time being. The implication being we’d take care of that later.

Or not. In the middle of the lectures and show-and-tell sessions, he also said that some backscatter is fine — because it shows that we were actually underwater. Because stuff does float around in the water. Because we are suspended in a medium that is rich in planktonic life. So, sure, remove a few bits of backscatter here and there. But don’t necessarily spend countless unadulterated hours doing the click click click click click thing… yeah.

Words are cheap. So I’ll let some photos speak for themselves.

This is my ode to backscatter.

After my first round of editing California sea lion photos from the Cali trip, I came upon a photo in my overflowing files that I had overlooked the first go-through. I instantly loved it, and I shared it on Facebook before I had edited it at all. That is, before I had removed any backscatter. But then I went in and removed a bunch of the backscatter.

What? What just happened? Did the earth’s polarity shift? Have aliens landed and taken over my brain? This flies in the face of my rote, painstaking nightly labors of the past several years, ever since I got Lightroom installed on my laptop. 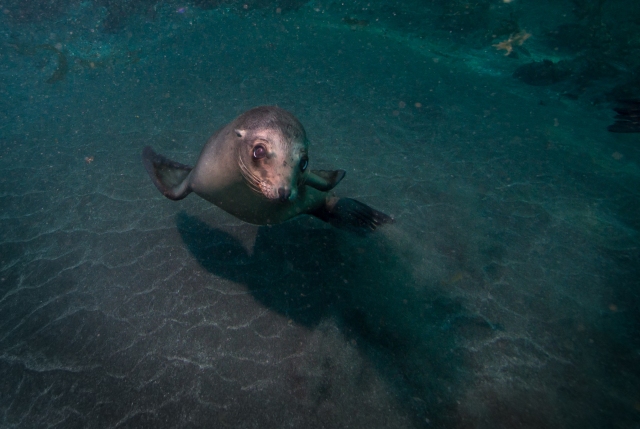 And here, as it was originally, just as shot. 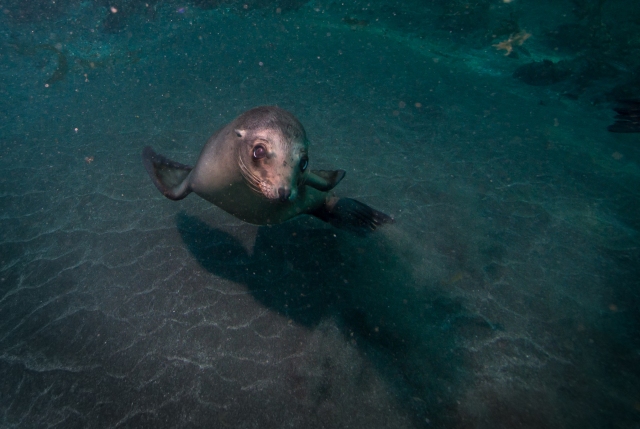 I like the second (original) one better! The photo itself is austere. The backscatter gives it heft, solidity, grounds it firmly in the water world. Gives it dimension. I love the sea lion, but without the backscatter, he looks flat and kinda boring.

On that trip, Richard taught me a lot about lighting. But he might have inadvertently taught me even more about backscatter.

Then there’s this Garibaldi. I removed some backscatter from this shot for my article in the Marker Buoy Newsletter — mostly I just muted it so it wasn’t so apparent (because even by then I was recognizing the value of the backscatter). I regret even the muting now.

Again, shown in reverse, with the edited version first:

And here, as it was originally shot:

I like the second one much better. The first one looks like several accidents conspired on it. The second one looks like only one accident occurred, and it was a happy accident. (And that is the true story.) It may not be an award winner, because the problem is my strobe was placed too far out in front of my camera. But it’s still pretty cool.

In the end, it is unlikely I will return to past photos to resurrect backscatter I have relinquished. But I have plenty of material that was never edited — often because of the over-abundance of backscatter.

For my grand finale, I’m going to show one last shot that has had no backscatter removed whatsoever. It is one of the young opalescent squids that greeted me almost daily in August 2015 during my early morning dive series at Three Tree North. There is some ink in the water, and there is a massive amount of particulate matter. Unedited, the shot is almost ethereal, like he’s in space, like we’re floating in space together. It’s real, and it’s beautiful. Beautiful with the backscatter.